Previously I had mounted a simple dive light to the side of my goodman handle which had the video camera mounted on like this... 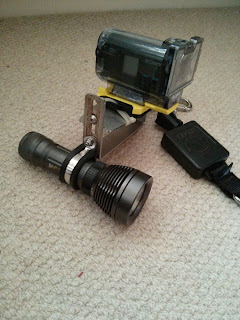 But the issue was, the reflector in the torch was creating a hot spot in the images. 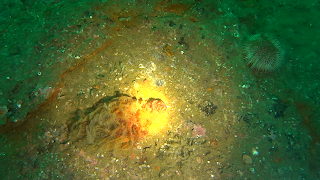 So I set out to remove the reflector from the torch and move the LED to as close to the lense as I could, to create a wide angle light. Basically copying the off the shelf video lights on the market.

So, I bought another one of the Cree lights ( as per my blog) and modded it like this...

Disassemble the light and remove the LED module... 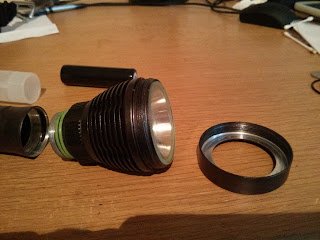 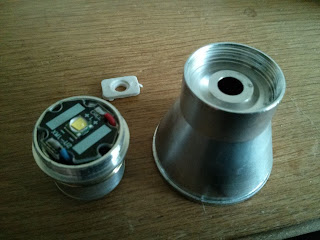 The LED pcb on top can be lifted upwards, it has some play in the red and blue wires but not enough to bring the LED to the front of the torch, so these need to be lengthened.. 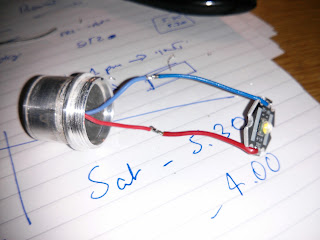 I unsoldered the original wires from the LED pcb, found some new cable of the same colour ( multi-core) and soldered them up like above.. I also put some insulation tape over the connections. New length is only about 1.5 inches..

To hold the LED pcb close the lense, I cut a 40mm length of steel angle line and tie wrapped the LED pcb to it, placing a good squirt of heat sink compound between the two. 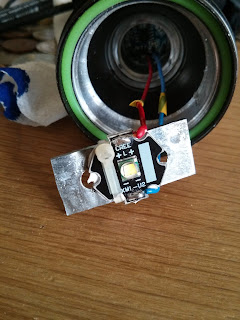 The steel strip is only held in place by virtue of it being a tight fit.

Inside the head there is an edge where starts to get narrower, I measured this edge to be 40mm approximately in diameter, so if I cut something of that length it would sit on the edge rather falling in.

I'm working on a neater solution with a 40mm washer instead but it was a good prototype solution.

I was worried that the LED would get too hot given the small piece of metal now acting as a heat sink and relatively low contact area with the side of the torch but its not had a problem.

The next major problem to overcome is, the reflector is used to hold the LED module against the battery to make the circuit. Removing the reflector, basically makes the module and battery fly upwards and out !

To overcome this, I glued the module into the head with J-B Weld.

You need to be very careful here, because glueing the LED module in the wrong position will stop the magnetic ring selector working i.e. no turn on.

To get round this slight issue, mark inside, the position you will want to glue it in. I turned the ring into the ON position, pushed the LED module down and turned it until the light came on constantly. Then I marked on the LED module and the inside of the head like so.. 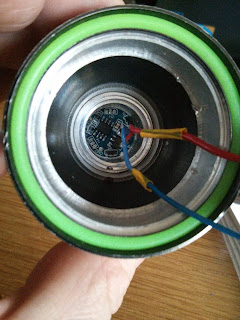 This gives you the correct position.

To fix it in and make the circuit with the battery underneath, I removed the spring on the underside and glued  the mating edges. 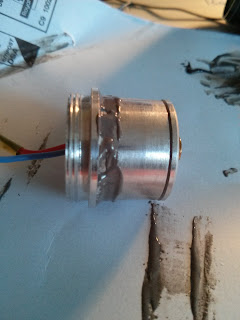 Pushing it in, lining up my marks and leaving overnight to set.

Once the glue has set, you can place the LED back in the head, on its new base and tighten up the lense/bezel. 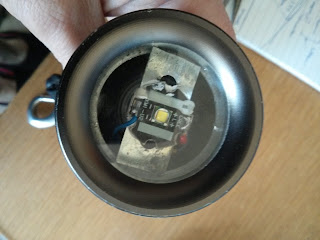 In my 'prototype' the metal plate is a snug fit so once pushed in it isn't going moving too soon. I didn't need to do much else. 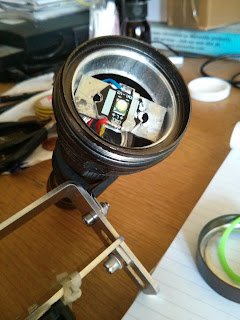 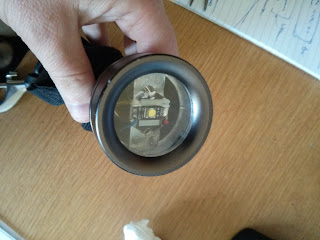 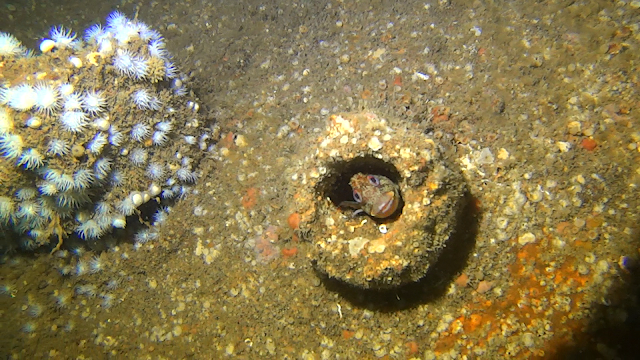 Tompot Blenny on the MV Aeolian Sky.  I think this was taken around 23m, vis was 2-3m and distance 1m to subject. 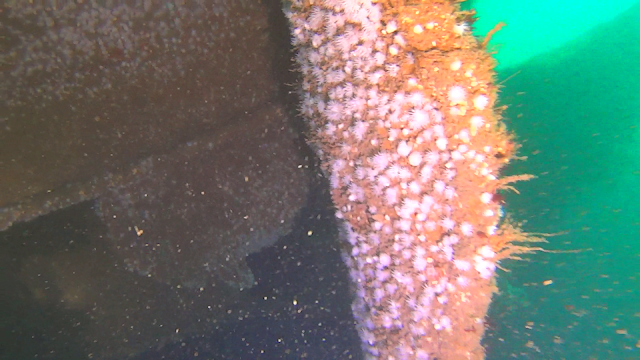 In the first image above, the light is cut off in the very corner, which i think might be the furthest corner from the light, I reversed the image because the Tompot decided he wanted to stay upside down which doesn't make for a good picture so the bottom right in fact the top left in the real life, which at opposite end on the rig from the light. My only thought is to move the LED closer to the lense.

Even a second torch would sort that one out or mount higher up on the handle.

The second image shows some backscatter i.e. the muck in the water. It was pretty bad but maybe positioning the light further away/up would sort that out ?

I like the look of the Light For Me setup for the GoPro with its butterfly/adjustable clamps on the side...If I can find those I might invest in them.

On this dive and those ambient light conditions, the light only had a range of 1.5m approximately, beyond that it, it looses it's effectiveness so you need more power! Maybe a second light on the other side of the rig. But I do like the size/ease of use of this set-up, it fits in a pocket so no special entry requirments.

The light became a bit loose in the clamp, will need to put some inner tube around it to give it some grip.

1) At Max setting, two lights give an adequate light on the scene at a range of 1m (3ft), this is in darker waters. Night dive might be better further away, lighter / closer to the surface your going to need to get very close to make a difference, say 0.5m ( 1.5ft).

2) Backscatter, the lights are quite close to the camera and like a stills camera its suffering from backscatter. Strangley its ok at the short ranges <1m but as u get further away from the target its pretty awful. Its a shame because the form factor is really neat and not bulky at all. But you can't live with it, its too annoying. Only solution I can think of is to move them off the goodman handle with arms like the Light For Me design. Need to see whether that suffers from the same issue before investing in those arms.

4) The 3rd torch i purchased, I couldn't remove the pill to make the modification, maybe it needs a little more force but I avoided this by using the ones i can mod for use as video lights..